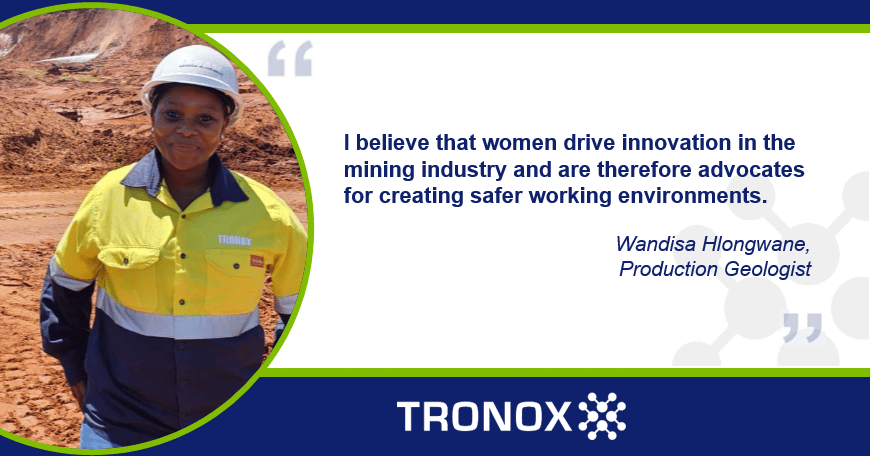 In recent years, mining companies in South Africa have become increasingly aware of both the business and moral imperative of enhancing the representation of women across all levels and are attempting to increase the numbers of women through various initiatives.

At Tronox South Africa, we strongly uphold our value of building our organization with diverse, talented people who make a positive difference and we invest in their success. Aligned with the Mineral Council’s vision, Tronox has a unique and diverse female talent.

Wandisa Hlongwane, Production Geologist at the Fairbreeze Mine in KwaZulu Natal, South Africa, joined Tronox in 2012 where she was based at Hillendale Mine, where her primary focus was on the exploration of Fairbreeze Mine. In 2016, Wandisa then moved across to the Fairbreze mine when it officially became operational.

Hlongwane is a strong believer in turning challenges into opportunities, and an example of this was when she joined Tronox where she was expecting to work with the Senior Geologist who would guide and mentor her, however, that person took up an opportunity to work in another area of the operation. “I had to learn fast, and this is one of the main reasons I believe in operational work manuals; just like any machine or piece of equipment, a manual is required, so business needs to document how and what we achieve,” says Hlongwane.

“We do all of this to enable future employees to be able to orientate themselves first and foremost, and then they will be in a position to resolve problems and challenges.

“This is when we learn, solve and innovate”, adds Hlongwane.

Today, Hlongwane plays a vital role as a member of the Tronox Diversity Network (TDN) and believes that as leaders we need to include everyone’s voices in the decision-making process. “I believe that women drive innovation in the mining industry and are therefore advocates for creating safer working environments,” says Hlongwane.

Hlongwane has also been a member of Women in Mining South Africa (WIMSA) since 2018 and is a registered mentor for young female graduates coming into the industry. As a member of WIMSA, she has had the honor of being exposed to a number of industry female role models like Lindiwe Nakedi, Chairperson of WIMSA, as well as the Founder and Director of Gubhani Exploration.

When asked what drives her to succeed? Hlongwane’s answer was “the world keeps changing, so I will keep learning”. Hlongwane is an example that women can, and do, succeed in building interesting and rewarding careers in mining.

Hlongwane completed her Master’s Degree in Mineral Resource Management in 2019 and is now exploring the idea of pursuing an MBA.